What You Need to Know About Green Roofs

Transforming barren concrete, cement and asphalt roofs into lush green oases is one of the best gifts you can give your city, its wildlife and yourself. Here’s why.

Green roofs are now common enough to have pervaded the public lexicon.

Like “janky” and “Bye, Felicia,” they have a permanent place in global culture.

If someone drops the phrase “green roof,” it conjures up images of pretty wildflowers or sedums, all cozied up together eight stories high. Throw in some birds and butterflies, and we have a pretty cool recipe for urban ecology, right?

What Makes a Green Roof? 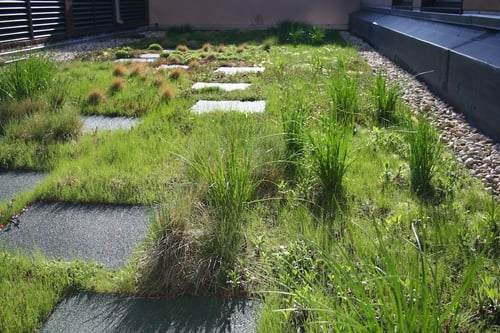 Unfortunately, many people aren’t quite sure what has to happen to create this roof. What materials go into the design, how are green roofs built, what do you have to do to get one for yourself, your company, your institution?

Others are well-versed in the magic of green roofs (we’re talking to you, engineers and architects), but don’t have all the tools needed for optimal deliverables.

If you spend a lot of your time thinking about how to build a better green roof, but don’t feel you have all the materials and/or knowledge to do so, you’re not alone.

Here in America, there exists a lot of confusion within the industry. If you look to Europe, though, you’ll see a very good example of a geographic region clear on the benefits of green roofs, and the role they play in the environment. The public, private, educational and environmental benefits become clearer than water in a rooftop rain barrel.

We feel it’s time someone stepped in and clarified things here in the Midwest as well. Let’s take a closer look at green roofs, discuss their role in the environment and consider what you can do to help.

So, Just What Are Green Roofs? 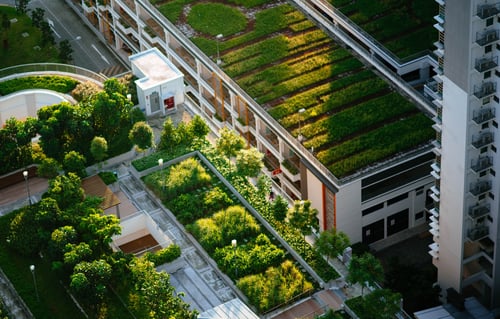 If we were betting people, we’d bet your conception of a green roof involves succulents.

Specifically, those low-growing, fleshy-leaved succulents known as sedums (also called stonecrops). Sedum has earned its reputation as green roofing’s workhorse for a good reason: It rocks at trapping moisture as it comes from the sky, then releasing it back into the air at a later date – reducing the impact of stormwater on cities and ecosystems.

But don't let that limit your view. Green roof systems so much more than a thin membrane of plants. In fact, the visible green is just the icing on the cake; there’s so much more happening beneath the surface.

As Green Roofs for Healthy Cities explains, “A green roof system is an extension of the existing roof which involves, at a minimum, high quality water-proofing, root repellent system, drainage system, filter cloth, a lightweight growing medium, and plants.”

In other words, a good green roof design must, at a minimum:

That’s again too simplistic a view, though. Just because you set up a system in which you can technically grow plants doesn’t mean you’ve got a fully functioning green roof.

Not everyone shares this belief, but at Ecogardens, we believe “green” should involve more than the top layer. If you use lushly growing grasses that were fed lots of fertilizers and pesticides at the nursery, is that green? If you use a cutting-edge eco-friendly component that’s known for breaking in a year – at which point you have to use new resources to replace it – is that green?

Our definition of a truly green roof is one that takes into account not only drainage and growing media and plants, but the nature of their fabrication and implementation.

That said … why do we need them?

Why Do We Need Green Roofs? Stormwater, Baby 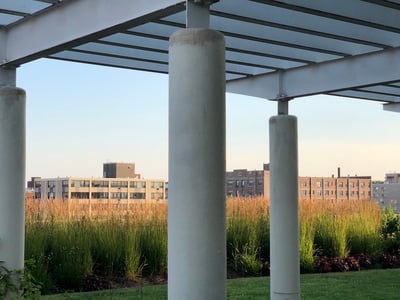 The truth is, green roofs are more than an optional decoration; they are an environmental imperative.

First and most importantly, green roofs form the vanguard in the fight against stormwater.

Each rainstorm or blizzard dumps billions of gallons on cities like Chicago, St. Louis and Detroit. When it has nowhere to go, stormwater pours off of buildings and flows through the city, quite literally “storming” the streets and sewers.

This causes a huge range of harms, from pollution and disease to erosion and algae blooms.

Both intensive (deep media, like a rooftop garden) and extensive (shallow and low-profile) green roofs do much to fight this. Instead of letting it run off surfaces, green roofs grab that water and hang on tight. That is perhaps the most important reason green roofs matter.

If your home, office building, campus or other location doesn’t currently have a way to harvest rainwater and put it to good use, green roofs are that one-two punch you’re looking for: stormwater retention and aesthetic appeal, all in one.

What Other Benefits Accrue to Buildings with Green Roofs?

As powerful an ally as they make in the war on stormwater, green roofs do so much more than that. So … why green roofs?

For one thing, they look darn good. Aesthetically, there’s a huge difference between a barren rooftop, adorned only with pipes and vents, and a well-frequented green space or rooftop garden. Which you would prefer outside your window?

We know, we know. The vents. Obviously.

Moreover, green roofs create amazing habitat for animals of all feathers (or stripes, tails, wings, what have you). Birds, bees, butterflies, flies, squirrels … our cities and world can’t live without these critical components of our ecosystem, yet increasingly, they have nowhere to go.

Green roofs make room for them. Such rooftops also:

As Green Roofs for Healthy Cities sums up, “Green roof technologies not only provide the owners of buildings with a proven return on investment, but also represent opportunities for significant social, economic, and environmental benefits, particularly in cities.”

Plus, when we steward green roofs carefully, we provide the above services not only to ourselves and our fellow humans, but to the environment and the world as a whole. If that doesn't sound worth it, then you're probably the kind of monster who also doesn't like ice cream. So we really can't convince you. For those of you who are sane ... time to get started.

How Can You Get Started with Green Roofs? 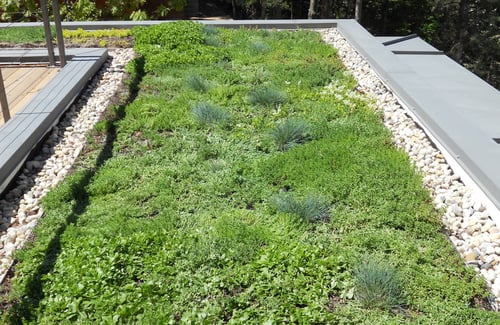 Getting started with your own green roof isn’t as hard as you might think.

If you build urban spaces for a living, maybe you only have a question or two – in which case you can get started with a bit of consulting stat.

On the other hand, if you’re a homeowner, building owner or manager, or another individual without a lot of green roofing experience, maybe you don't know much at all. That's okay; we’ve got your back as well.

Our goal here at Ecogardens is to provide the greenest possible green roof experience, from project inception to the day the first butterfly moves in. We do so by testing components obsessively, ensuring they work together seamlessly, treating each project as unique and stewarding your site long into the future - all for an affordable cost.

If that sounds like a good deal, we invite you to get in touch today. We’d love to tell you more about who we are and how we can help both you and Earth.